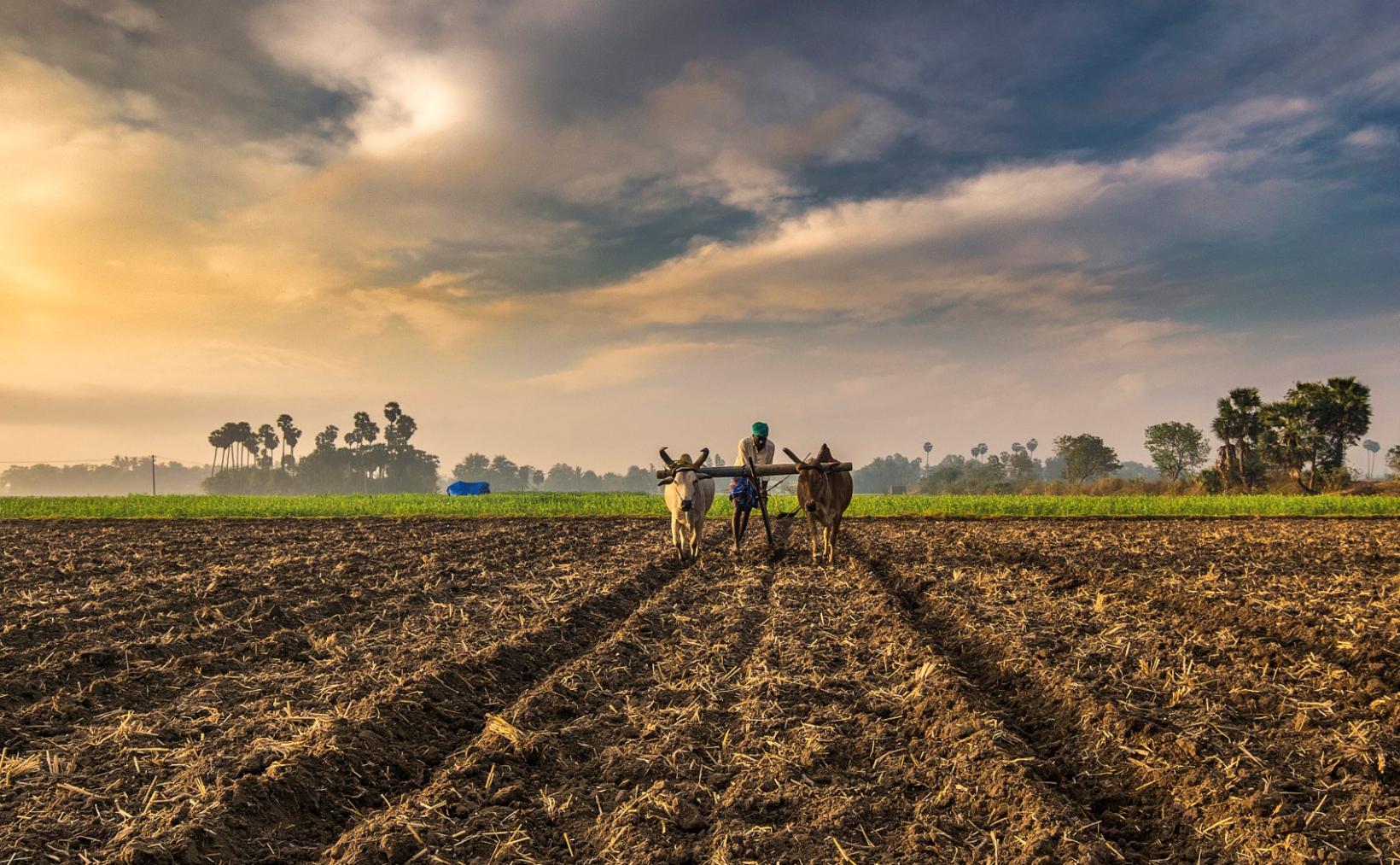 In our last blog, we read about why it is challenging to procure reliable drought risk information.

The Next Generation Drought Index (NGDI) platform is a cutting-edge project spearheaded by the World Bank’s Disaster Risk Financing and Insurance Program (DRFIP), and supported by the International Research Institute for Climate and Society at Columbia University. Through a combination of unique expertise, satellite technology and simplified design processes, it aims to provide access to the latest and most reliable drought risk information.

First, the NGDI is based on a co-design process whereby clients generate their own drought risk indicators from a wide selection of pre-processed data.

Through a simple online interface, users are getting immediate feedback about the performance of drought variables, such as rainfall, soil moisture, vegetation health, selected insurance windows during the agricultural season, and other parameters. The step-by-step process leverages local expertise and walks decision-makers through the critical phases of designing drought indicators that fit their own application. The interactive and consultative features strengthen risk ownership and governance while facilitating integration into clients’ risk management frameworks.

In contrast to traditional design methods, the NGDI features both top-down and bottom-up approaches. Every index design process starts with basic questions about the geographic unit of coverage, the choice of insurance/risk financing windows, and relevant variables to characterize historical drought impacts. Once designed, indexes are then compared and benchmarked. Their performance is characterized against historical or reference data. Users can adjust their assumptions and visualize almost instantly the end-product performance, which is no easy feat considering the complexity of drought modeling and the lack of transparency in risk models.

Second, NGDI relies on a convergence of evidence approach.

The NGDI platform does not assume a “best” data set or index to monitor drought. Instead, it offers a wide range of variables to be combined into higher-performance drought indicators. Different data sets can be visualized and integrated, from pre-processed satellite data on soil moisture, phenology (e.g. plant growth cycle) and farming practices (e.g. planting start of season) to climate and vegetation health. Users are empowered to make their own decisions and are informed by objective and transparent performance benchmarks.

In other words, the performance of independently estimated variables (such as satellite rainfall, soil moisture, and vegetation health) and their ability to represent or capture drought accurately can be assessed in just a few clicks. What used to be a complex process is now made available to users within minutes and under a single user interface. It also encourages a better understanding of the strengths and weaknesses of various modeling options and contributes to higher confidence in the financial response mechanism supported by those indices (Figure 1). 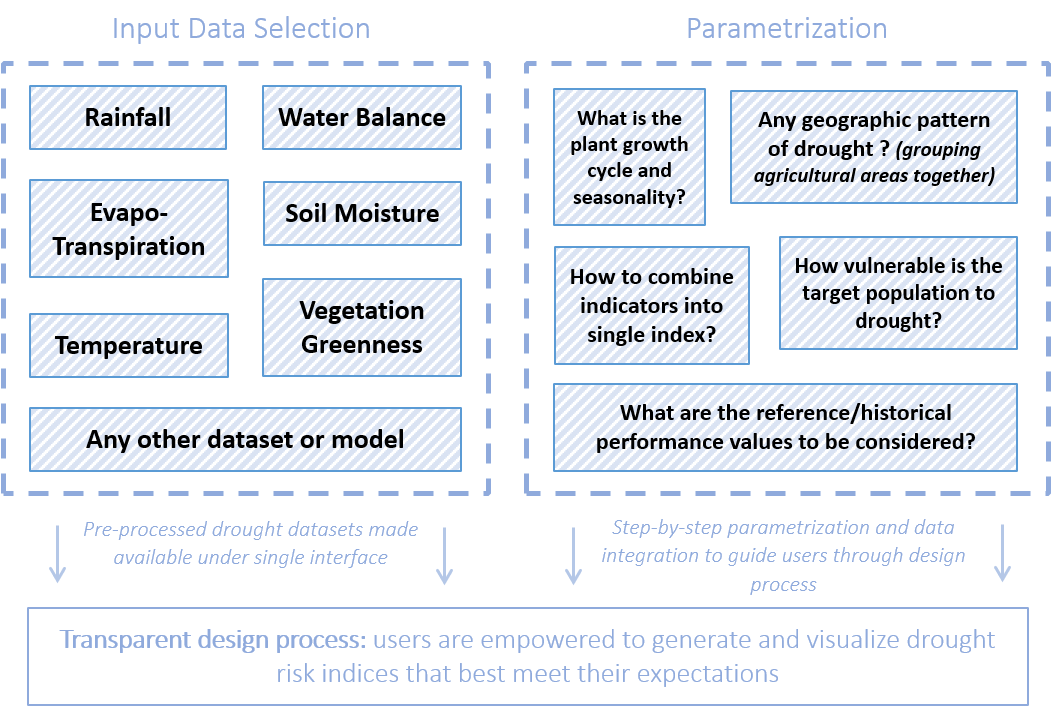 In the face of climate change, data on past drought characteristics are often only a partial predictor for potential future events. For instance, since 2000, the western Sahel has experienced more rainfall overall, but fewer rainy days than it did previously. The result has been lower financial response and insurance payouts in recent years, despite the occurrence of several major events. Statistical techniques adopted by the NGDI—such as detrending (removing long-term behavior or bias in historical data) and pattern identification (e.g., determining which regions are likely to be affected at the same time)—contribute to solving some of these issues by generating a whole catalog of potential events that is a better predictor of the future.

Combining these various data sets at critical time windows across the season allows more accurate estimations of drought. These estimations significantly reduce the mismatch (also known as “basis risk”) between a predictive measure of drought by indices and its actual impact on the ground only known months after the harvest. Figure 2 illustrates gains in index performance against farmer-reported drought years as a reference. The results show the matching coefficient more than doubling when considering more elaborate drought indicators as generated by NGDI. 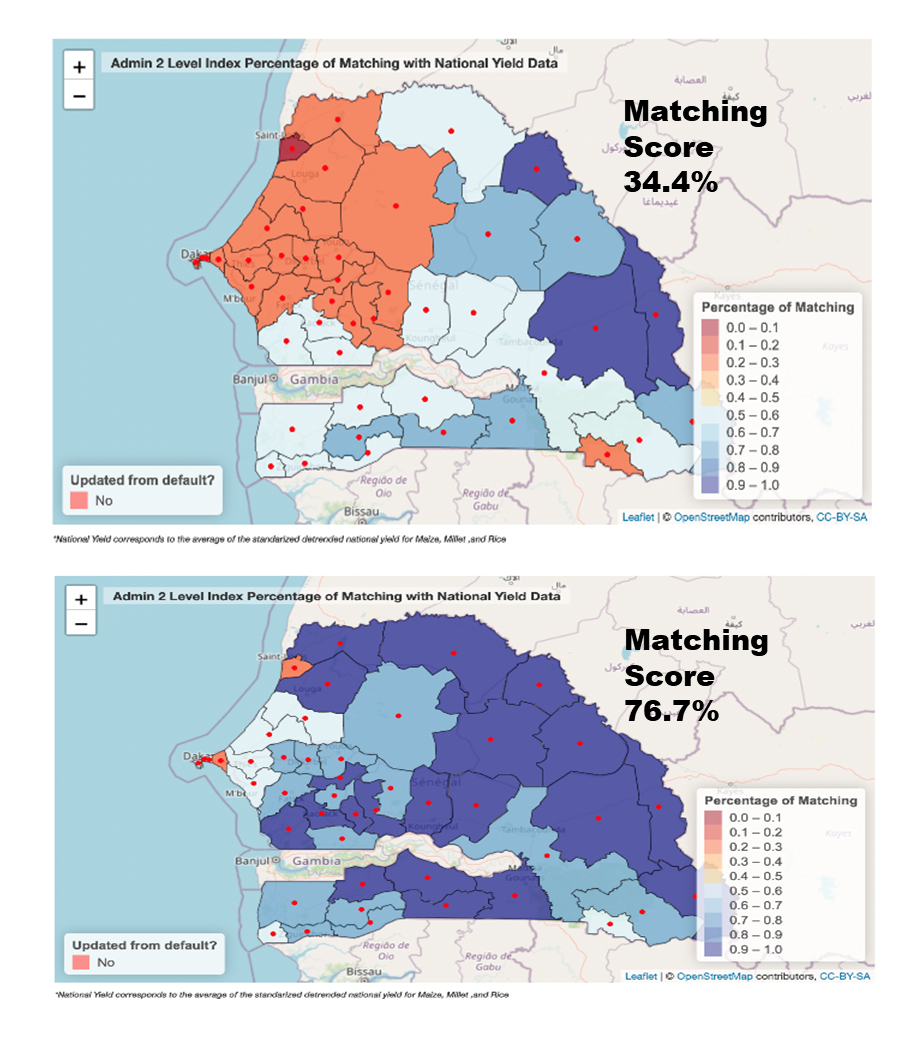 The next steps include applying the NGDI platform to the design of shock-responsive social protection mechanisms targeting the poor and most vulnerable. The NGDI platform could thereby complement early warning systems currently in place, including the Cadre Harmonisé, a Central and West African analysis framework on food insecurity. NGDI could also further inform the use of current risk transfer products in the region. Technical developments and further customization to specific crops and use cases will be the focus of additional scoping studies at the country-level, with highly promising applications in accurate yield estimation throughout Africa and Asia (see Figure 3).

Source: Department of Earth System Science and Center on Food Security and the Environment, Stanford University

Understanding past, present, and possible future drought impact pathways enable the development of more reliable financial response products that trigger when needed, leading to a reduction of basis risk. From a user’s perspective, this means improved risk ownership, a better understanding of insurance products, and better clarity on where and how these products are expected to trigger. In turn, these improvements allow the full spectrum of risk financing instruments to be utilized in a more reliable way, paving the way to more cost-efficient drought risk financing strategies and to a more impactful response to food insecurity overall.

Antoine Bavandi is a senior risk finance specialist with the Crisis and Disaster Risk Finance team at The World Bank. In this role, he advises developing countries on designing and implementing disaster risk financing and insurance solutions through analytical work and policy dialogue.

Daniel Osgood leads the Financial Instruments Sector Team at the International Research Institute for Climate and Society (IRI). He has an agricultural economics degree from UC Berkeley.

…
His team drives action and insurance efforts around the world, supporting many of the index insurance projects that have gone to scale, ranging from national level insurance to the hundreds of thousands of smallholder farmers purchasing index insurance contracts built through a farmer-driven, science-based crowd at core processes. He has been involved in global policy processes such as the UNFCCC, with projects he works on highlighted by Ban Ki-moon in the opening speech at the 2015 Paris COP and has had press coverage in venues spanning Voice of America, Al Jazeera, the Guardian, Nature, New York Times, and Reuters.
Expand

Núria Branders is a Social Protection Specialist at the World Bank.

…
As a team member of the Sahel Adaptive Social Protection Program, she supports governments to build the pillars of adaptive social protection systems to protect poor and vulnerable households from the impact of climate shocks. Initially based in Senegal, her expertise also serves other Sahelian and West African countries.

Prior to this current assignment, she worked with several NGO’s, UN agencies and donor agencies coordinating food security and livelihoods programs in emergency, protracted, early recovery and development contexts, in Africa, South East Asia and Middle East. Ms. Branders holds a master in bio-engineering (agronomy) from the Catholic University of Louvain and is fluent in French, Spanish and English.