Too Sci-fi To Be True? How The Earth’s Gravity Measurements Of The GRACE Satellite Mission Supports Drought Impact Monitoring And Financial Instruments 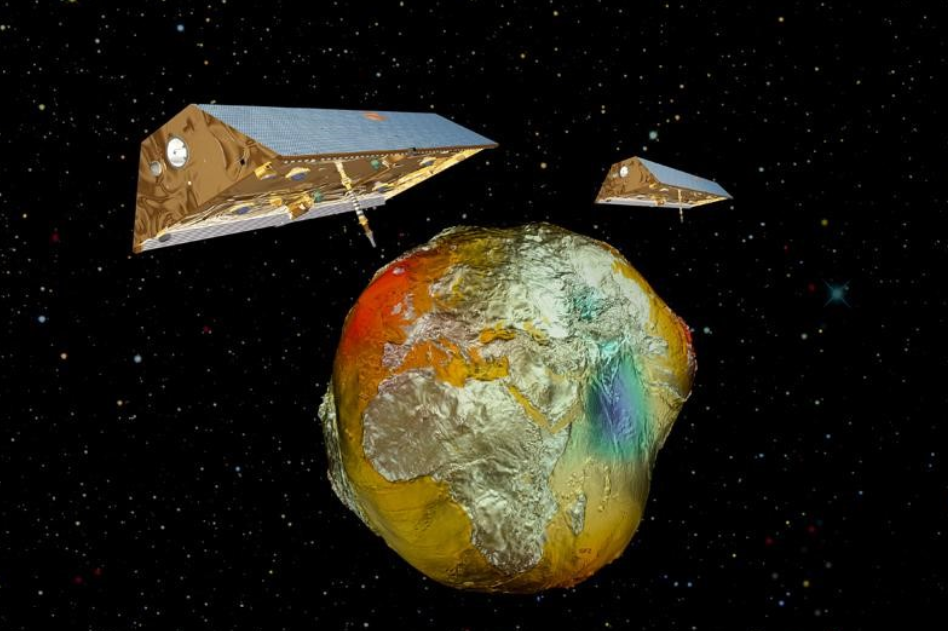 [Figure 1: The twin-satellites GRACE with the gravity field of the Earth known as the “Potsdam Gravity Potato” (Source: AIRBUS/GFZ)]

Between 2002 and 2008, a groundwater depletion (mostly caused by irrigation) was suspected in the Indian states of Rajasthan, Punjab and Haryana. Data from the twin satellite mission GRACE (Gravity Recovery And Climate Experiment), helped to quantify the water deficit by analyzing the Earth’s gravity field anomalies, which can be precisely detected by measuring the changing distance between the two satellites. Fluctuations in terrestrial water storage (TWS), basically groundwater and other components, affect our planet’s gravity field, which in turn affects the distance between the two GRACE satellites, flying on the same orbit and separated by around 220 kilometers (Fig. 1). The analysis of GRACE data indicated that the groundwater depletion was equivalent to a net loss of 109 km3 of water, roughly double the capacity of India’s largest surface water reservoir.

Climate extremes, such as droughts and extreme rainfall events, are expected to strongly influence global/regional water resources in addition to the growing demands for freshwater and agricultural production. Drought usually does not affect all components of the hydrologic cycle simultaneously. Atmospheric deficits are first reflected in meteorological, then in agricultural and hydrological drought. This study focuses on the latter component and aims to examine the possibility of using satellite-derived terrestrial water storage (TWS) and other moisture-related variables to monitor drought impacts on a global scale. Monthly changes in TWS, satellite precipitation and soil moisture data will be used to compute several drought indices. To increase the spatial resolution of these indices GRACE TWS data will be integrated into a water balance model, which increases the spatial resolution from ~300 km to represent hydrological processes within ~12.5 km. This way, GRACE TWS data could support both the operational monitoring of drought conditions and the historical calibration of financial instruments. Parametric insurance initiatives, for instance, often lack information about the most severe impacts of drought events, represented for instance by lower groundwater tables. Despite unwanted anomalies in the gravity measurements, which can be caused by earthquakes or surface deformations, the first results look very promising. 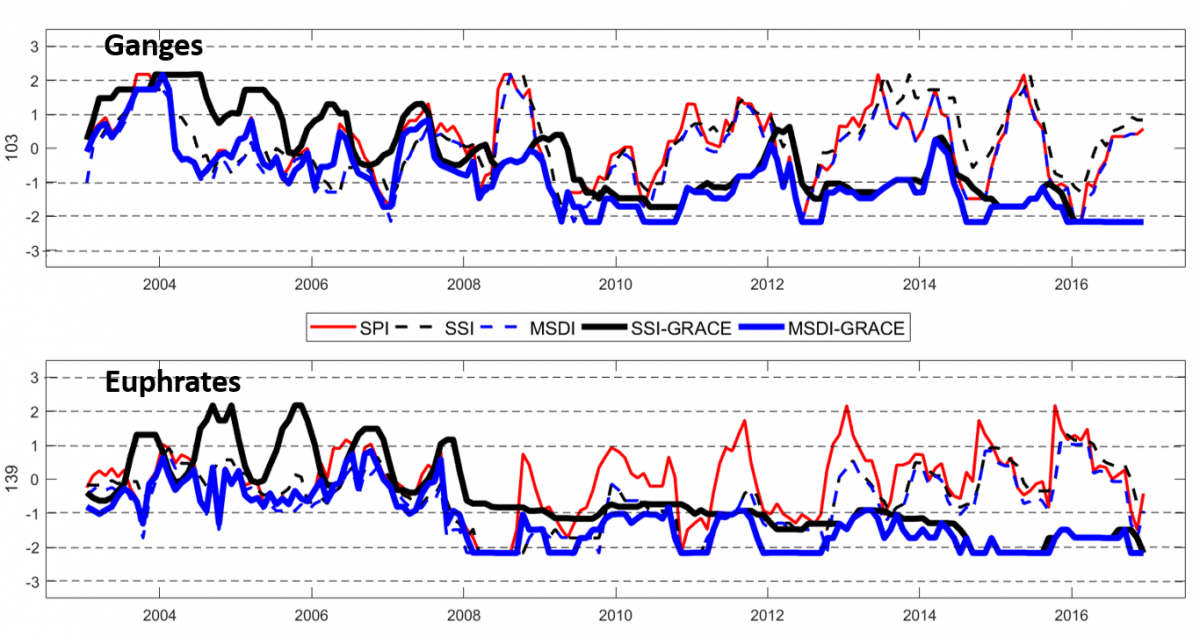 GRACE is a joint mission of the National Aeronautic Space Administration (NASA), the German Aerospace Center (DLR) and the German Research Centre for Geosciences (GFZ). GRACE data offer a unique perspective on water storage change, enabling not only the development of a novel “Standardized Water Storage-derived Drought Index”, which can be calculated separately for each drainage basin across the globe, but also to track rainfall through the land surface and root-zone into the groundwater layer. This approach was already applied to the world’s 156 major river basins, indicating that climate variability was responsible for about 50% of the severity of hydrological droughts, whereas the rest of deep soil and groundwater depletion was caused by human influence. Hence, estimations of groundwater storage changes allowed for recovering up to 50% of the information which would have been otherwise lost by using common hydrological and meteorological models. Fig. 2 summarizes changes in the moisture conditions of two major basins (Ganges and Euphrates) between 2003 and 2016. Both cases show that positive rainfall anomalies do not necessarily recharge the groundwater layer (blue curve remains low).

GRACE FO (Follow-on), the successor of the original GRACE satellites, entered the science phase of its mission on 28 January 2019. In line with other activities led by the World Bank’s Crisis and Disaster Risk Finance team this project will focus on supporting drought monitoring, drought impact forecasting and an advanced disaster risk financing mechanism. A first pilot is planned for West Africa. Expected outputs will concentrate on the following topics:
●    Improving our understanding of temporal (seasonal to decadal) and spatial (~12.5 km resolution) links between meteorological, agricultural and hydrological drought
●    Advanced calibration of financial instruments by identifying the worst historical drought events;
●    Recovery of up to 50% of the terrestrial water storage information not captured by common hydrological and meteorological data;
●    Development of novel early warning mechanism before groundwater levels reach critical thresholds.

This blog post was written supported by the GRACE team. Special thanks to Elisa Fagiolini (lead scientist at the Helmholtz Centre Potsdam, German Research Center for Geosciences (GFZ), Ehsan Forootan and Maike Schumacher (Institute of Physics and Meteorology, University of Hohenheim).

Your email address will not be published. Fields marked with * are required.

…
He supports the World Bank’s Disaster Risk Financing and Insurance Program focusing on the Next Generation Drought Index project and related activities in the area of extreme climate, food insecurity and conflict. Prior to joining the World Bank, Markus Enenkel coordinated or supported the disaster risk management activities of several humanitarian and development aid organizations in Latin America, Africa and Asia. He is currently a coordinating lead author of the upcoming UN Global Assessment Report on Disaster Risk Reduction and was selected to represent Austria in the Group on Earth Observations’ disaster risk reduction working group. Mr. Enenkel holds a PhD in microwave remote sensing from Vienna University of Technology and completed his post-doc at Columbia University.
Expand
Co-Authors